The first time I’d ever seen art by Shane Grammer was at an anti-sex trafficking confernce and Shane was there doing a live art denomstration. I was completely floored by his artistic style. I’d never seen someone mixing mediums like he did to create a piece of art so full of life and emotion it litereally could bring tears to your eyes.

After the demo we ended up talking and that’s when I learned Shane was every bit as awesome as his art. He told me about the work he’d done abroad- painting murals on orphanages, churches and in areas of high demand for child sex trafficking. He explained to me that he believed God had given him this talent to “bring hope and joy to the downcast and broken-hearted.”

Throughout the years I was lucky enough to meet back up with Shane at events and I kept up with him on social media. Little did I know that our paths would cross again but this time it would a little closer to home for both of us.

Last November the Camp Fire tore through Paradise not leaving much behind. I had friends who lost homes in Paradise. Shane did too. “Growing up in Chico, I had at least two dozen friends that I grew up with through jr. high and high school, that lost their homes in Paradise… It really hit home for me on Facebook when friends started to post what was left of their homes after the fire.” Shane explained. Looking at a particular photo, Shane saw inspiration in something most others would just have over looked. It was a chimney.  “I just knew… You just know as an artist. There are times when people speak or I see images from a film or something like that and I just know I gotta paint that… I knew I needed to paint that chimney.”

This was just the beginning for Shane up on the Ridge.  After that first painting the owner of the property Shane had painted on posted the mural in a Camp Fire Survivor Facebook page and the positive response in shares, likes, and comments was what propelled Shane to continue painting in Paradise. “What was powerful about it was for some people it was the first glimmer of beauty or hope since the fire.” Since his first painting on January 1st, 2019 to the time I interviewed him, Shane had created 18 murals in Paradise. “I got permission on every location because that was important. That town was devastated so I didn’t want to run around and do something that was illegal and would offend people.” 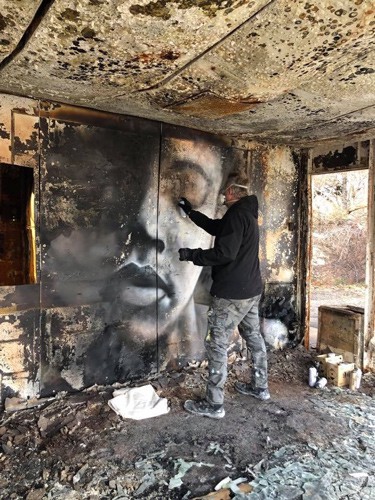 If you’ve noticed a theme in Shane’s murals in Paradise, you are correct. For the past 16 years he’s been painting an ongoing series he calls, The Bride. It’s based on a book in the Bible- The Song of Solomon. Christain’s will teach that this story is an allegory for God’s love of man-kind. “That’s something that’s very dear to my heart, so naturally, I painted The Bride series. I love the contrast with beauty over destruction.”

Shane also incorporated Camp Fire victims into the some of the murals. The likeness of his friend’s daughter looking towards the sky.  Another painted as a memorial to a woman who lost her life in the fire. And when you look at these murals among the remains, they don’t look out of place. 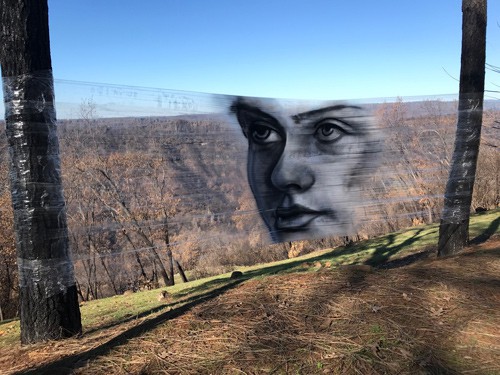 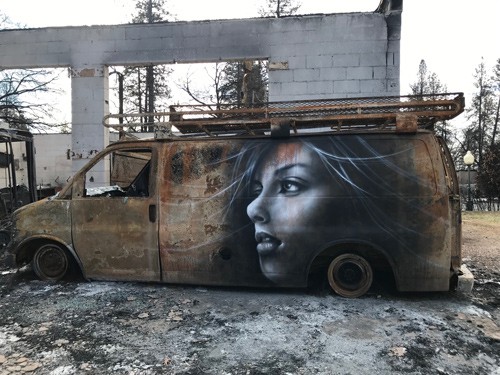 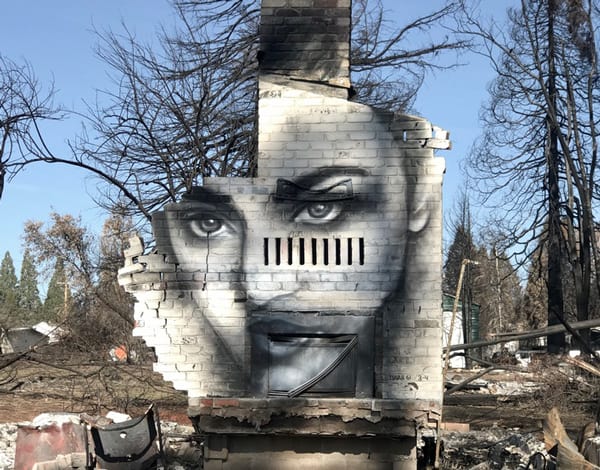 Painted in mostly white and black the murals look almost natural among the debris and carry of sense of belonging. Their symbolism is free to interpretation by its viewer, but created for the sole for purpose of bringing hope and beauty to a place devastated by disaster. Shane’s ultimate goal was to create something that would connect with its audience and move people. I believe he has achieved this and then some. 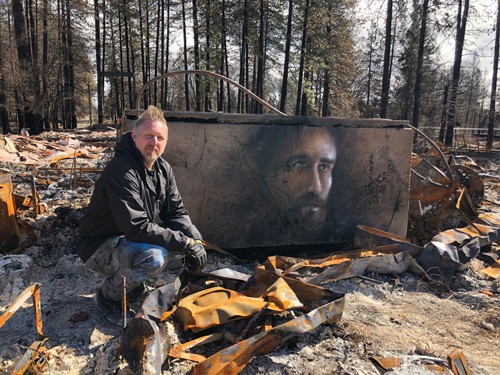 I look at all the surreal art Shane has created up on the ridge and am reminded that a lot of it is temporary. The very first piece he’d created on the chimney has already been knocked down as they’ve begun to rebuild.

What I love about Shane and his art is that a lot of what he does isn’t for the masses to enjoy. It’s for a more specific audience. The murals on orphanages, the anti-trafficking work, this art on the ridge- the majority of the population won’t see this but maybe the person who needs to, will.

Maybe knowing art like this is fleeting helps to appreciate it in the moment. Maybe this is the type of allure that helps you dream in times of tragedy. Maybe it gives you hope or at least brings a little beauty to your day.

If you’re interested in learning more about Shane or seeing more of his artwork, visit his website at ShaneGrammer.com.