Fishing: MY BEST SUMMER YET ~ By Bob Hertzig

My name is Bob Hertzig and I was born and raised in the town of Westwood, CA.  Westwood was a company owned lumber town and I spent my childhood there between 1942 and 1960.  Times were good, lumber was in high demand, the schools were full of kids, the houses in town were full of people and everyone seemed to have a job in the mill.  My Dad was the Fire Chief for Westwood, which meant that I got to play in the Fire Hall and associated with a lot of older men.  I used to like to listen to all their stories.  It seemed that one of the great pastimes was to go fishing and then to tell the biggest story of how many and how big of fish that they caught.

When I was growing up in high school, I was fortunate to have a steady job at George Young’s Market in Westwood. This kept me very busy with school, sports and working, so I did not have time to go fishing.  I always thought that it would be nice to catch a large string of fish or to land a really big one that I could brag about. After High School I went to College at Chico State and got my Bachelors Degree in Accounting.  After college, I went to work for the Federal Government, auditing Defense Contractors.  During that time, I lived at many different locations and have been in most of the Defense Contractor’s plants in the country.  After about fifty years of working, I have retired and spent half of my time in northern California in the summers and the winters in southern California.

At the beginning of the summer in 2009, I really wanted to go fishing to complete my dream of catching my biggest fish.  Without any fishing experience at all, I knew that I really needed some help.  I had heard that one of my old High School buddies, Dick Mason, had a Guide Service and that he consistently caught big fish.  I called Dick and told him what I had in mind and he said that he liked to fish Eagle Lake in the Spring, Lake Almanor in the Fall, and Lake Shasta in the Winter.  I said sign me up!

My first trip was to Eagle Lake and there were three of us.  We left early in the morning and launched the boat and started fishing about dawn. Dick showed me what pole to use, what bait was hot, how much line to let out, and how to “play the fish” and net them once they got to the boat. We caught our limit and we headed home about noon.  We went to Dick’s house and cleaned the fish and relived our victorious day.

My second trip, Dick called and said that the Bass were biting in Lake Almanor and I said “let’s go.” Again Dick provided everything, the boat, the equipment, the bait, and the stories.  We started fishing along the bank just after the sun came up and by noon the three of us had caught our limit of Bass and we started back to the boat ramp.  On the way back, Dick hooked us up to troll for some trout.  It wasn’t long and my pole took a dive and I had a really good fish on the line.  I could see that it was a nice fish when it would jump out of the water and its beautiful rainbow would sparkle in the sun. It seemed to fight forever and after some time we landed the fish in the net.  This was the biggest fish that I had ever caught.  It was 22 inches lone and weighed just under 5 lbs. It was a beauty.  Dick took my picture of my prize.  What a great Day!

I could not contain myself.  I was bragging to everyone.  I even sent pictures to my kids.  My son Jeff in southern California said that he would like to go on a fishing trip.  I called Dick and set a date.  Jeff flew into Reno and we met him there in the morning and drove through Lassen Park that afternoon.  The next day we were on Lake Almanor bright and early, trolling for trout.  It was a good day. The sun was shining, the fish were biting, and the air was clean and fresh. Again Dick provided us with a complete fishing experience.  Showed us how to fish, where to fish, and even helped us clean the fish for the best fish dinner ever. Dick even provided the photos so I can brag about this forever. Like I said earlier, this was the best summer yet! 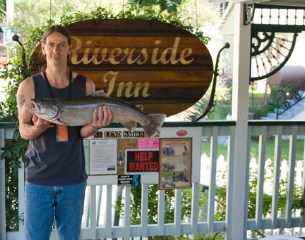 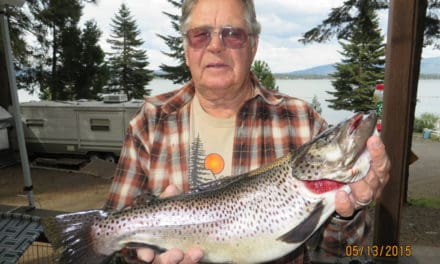 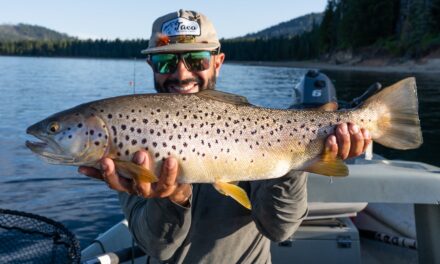 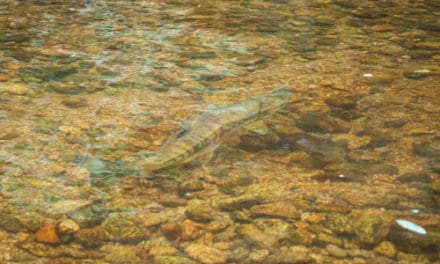